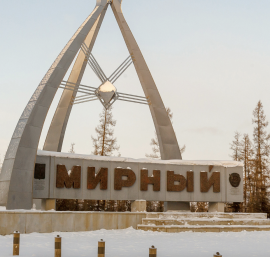 Russian diamond mining giant ALROSA reports rough diamond sales in December 2016 amounted to a modest (for ALROSA) $173 million, more than a $100 million drop from the $245 million in November revenues and a far cry from averages of around $430 million in the months prior. Nonetheless, the company posted a 26% rise in rough diamond sales for the year, hopefully putting a challenging 2015 firmly behind it. As with the rest of the major miners, ALROSA cites India's demonitization policy as the main culprit for the downturn. Yury Okoemov, ALROSA Vice President says that, “Sales results in December in the small-size segment still reflect weakening of small and middle-size Indian diamond-cutting companies due to the monetary reform underway in this country. Activity in other market segments corresponded to the seasonality of demand and our expectations.”

ALROSA supplies the diamond pipeline with a proportionally larger amount of small/lower-priced stones, precisely those that make up the bulk of Indian manufacturing. De Beers also cited India's cash crisis as a factor for its November-December sight results, stating, "The trade in lower value rough diamonds is experiencing a temporary slowdown as a result of the demonetisation programme in India...", but total revenues for their final sight was still $418 million. For the year 2016, preliminary figures indicate that ALROSA Group sold rough and polished diamonds for $4.486 billion, 26% higher compared to the similar period of 2015. Meanwhile, polished diamond sales for the same period amounted to USD 3.3 million.