Transforming The Diamond Industry: Analysis of Recent Changes and Challenges 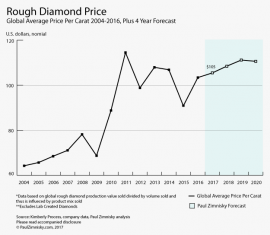 Diamond industry analyst Paul Zimnisky, in his most recent article "A New Diamond Industry", analyzes three significant changes - and the catalysts for those changes - that have been reshaping the diamond industry in recent years: 1) a new operating discipline, 2) a new generation of consumers, and 3) new technology. "The future of the diamond industry hangs on the follow-through of structural changes prompted by the challenges faced", namely: "the diamond industry's over-speculation on new consumer demand in China and India [and] the resulting financial consequences; shifts in generational consumer and cultural demand, and; the advancement of lab-diamond production technology." The themes of the clear and present challenges may be familiar, but Zimnisky clearly outlines the impact of those changes throughout the diamond pipeline.

He first discusses the speculative rise before the 2015 fall that caused the industry as a whole to take a hard look at its practices and begin to implement structurally overdue changes. Crucial here is the shift that occurred between the low point of 2009 (post-global financial crisis) and the spring of 2011, when rough diamond prices rose nearly 75% to an all-time high on an average price-per-carat basis. This was fueled primarily by new demand in the Eastern part of the world, "where the trend of giving diamond engagement rings [fueled by exposure to Western traditions] in China and India was becoming a new norm. Structural economic progress in China and India generated a significant new consumer base with the ability to afford diamonds and other luxury goods." Manufacturers wanted to get in on the opportunity, buying excess rough to meet anticipated future demand before prices inevitably caught up with the new market. Banks were equally seduced by the new prospects, making credit readily available. Strong demand for rough allowed diamond miners to congruently raise prices.

We know how this story ended: "Chinese end-consumer demand, while growing sharply, was not strong enough to meet the over-speculation of the industry, and the heavily leveraged diamond manufacturing industry was forced to take loses and curb rough buying. From the high in 2011, rough diamond prices retreated by almost 20% in 2012. The effect of over-speculation has changed the industry." Namely, major producers reduced rough supply to the market and started working with clients to preserve operating margins; leading lenders (Antwerp Diamond Bank, Standard Charted) folded or (ABN Amro) reined in financing, forcing manufacturers to operate more conservatively and manage less speculative inventory stocks, while retailers also became more inventory-conscious, particularly in China.

No shortage of ink has been spilled about the changing profile of diamond consumers, from young Chinese and Indian consumers to the millennial generation - who typically value uniqueness and an environmentally/ethically conscious story over sheer carat weight - and women making self-purchases of diamond jewelry. Zimnisky writes, "The diamond industry is adjusting accordingly. The idea of attaching a story that includes a diamond's journey from mine-to-consumer is being embraced by jewelry manufacturers and retailers. By including a diamonds provenance, consumer concerns related to ethical souring and assurance that the stone is in fact a legitimate natural diamond, and not a synthetic or simulant, are also alleviated." Miners are working to communicate production transparency and are the principle stakeholders in the Diamond Producers Association, while cutters and jewelry manufacturers as well as retailers are emphasizing design and branding, as well as the provenance story.

Finally, the emergence of gem-quality synthetic diamonds has gained pace and the industry is progessing rapidly. Zimnisky's conclusion: "Lab-created diamonds will change the diamond industry as there is a customer base that will embrace the price, the technology, and/or the perceived environmentally-conscious nature. As the industry develops, the proper message that both the natural and lab-created players need to continue to communicate with consumers is that these diamonds are in fact chemically diamonds, but they can be identified as lab-grown with proper equipment, point being, they are both diamonds but inherently different, at which point a consumer can make a purchasing decision based on price and tangible and intangible value assumptions. As the technology improves, the economics of gem-quality synthetic production will continue to improve." This will cause prices to fall, as their supply is unlimited theoretically, and they will certainly gain a larger share of market.