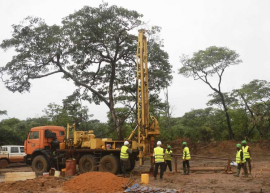 Australia-based Lucapa Diamond Company Limited has successfully defined a series of priority lamproite and kimberlite drilling targets at the Brooking Diamond Project in Western Australia and the Orapa Area F Diamond Project in Botswana, according to their ASX announcement. At Brooking, EM surveys have identified lamproite drilling targets in areas where diamonds and lamproite indicator minerals were recovered in sampling programs, while at Orapa Area F, a coincident magnetic/EM/gravity target has been defined within one of the world's most prolific diamond fields. Drilling programs to commence in 2017 at both the Brooking and Orapa Area F targets as kimberlite drilling is also stepped up at the flagship Lulo Diamond Project in Angola.

They state that the work being carried out at Orapa Area F and Brooking is in line with Lucapa's strategy of advancing low-cost exploration programs in known diamond provinces which have the potential to position the Company for continued growth as a diamond producer. Brooking is located within 40km of the Ellendale diamond field in Western Australia's Kimberley region, which was formerly the world's leading producer of rare, fancy yellow diamonds. Orapa Area F is located ~40km east of the prolific Orapa diamond mine in Botswana and within 4km of the BK02 kimberlite being bulked sampled by TSX-listed Lucara Diamond Corp. Lucapa and its partners will provide a separate update on exploration at the flagship Lulo Diamond Project in Angola (Lucapa 40% owner and operator). Read the ASX announcement via the link for greater detail.