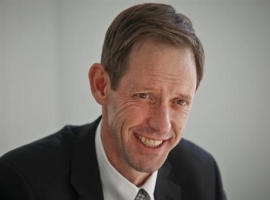 De Beers CEO Bruce Cleaver sat down with Joseph Pisani of the Associated Press to talk about how the diamond industry is trying to reach millennials, "the under-35-year-olds who may be more focused on paying off student loan debt than buying diamonds and getting hitched." The commercials the Diamond Producers Association launched in 2016 - the financing for which De Beers contributed to as member of the DPA - abandon the conventional view of diamonds purchased by a man for woman and instead reflect the changing nature of relationships and priorities for the millennial generation. De Beers says millennials are still purchasing diamonds, though they are typically less affluent than their parents were at the same age. "They are buying smaller pieces," says De Beers Group CEO Bruce Cleaver.

The Associated Press asked Cleaver how millennial diamond buyers are different than older generations: "They are not as traditional as their parents. We find that they self-purchase more than their parents did and that's quite an interesting opportunity because there was a time when pretty much all diamond purchases were men buying for women. We also find that purchase decisions are much more joint decisions when they're a couple." Accordingly, advertisements have become more bespoke: "Traditionally, diamond advertising was very much a man buying for a woman. We've started tailoring some of our adverts." Ads, of course, are not the only marketing channel available; product placement is also a key avenue.

Cleaver explains: "Often around events like Grammys, Emmys, Oscars, we find the celebrity that millennials identify with the most. We've had Claire Danes wear them. We've had Sophie Turner, who's in "Game of Thrones." So there's a range of celebrities who we'll dress in diamonds for these kinds of functions and then hopefully they will tweet and blog on their experiences. For example, we opened the new De Beers store on Madison Avenue (in New York) and one of the people we had over was Fan Bingbing, who's an extremely well-known celebrity and actress in China. She blogs all the time and used all social media while she was in the store. That is tremendously successful marketing. That was deliberate to get her here; even though the store is on Madison Avenue, it's a business that is very focused on Chinese tourists."

Asked what people are buying in different countries, Cleaver responds: "China in general consumes better-quality diamonds and is brand conscious. The U.S., being the enormous market that it is, just about consumes anything that gets offered for sale across the whole value chain. India is generally very small diamonds, lots and lots of very small diamonds. In America, repeat purchasing is a big thing. Once people have bought more than one piece of diamond jewelry in America, they on average buy six pieces over their life." And as for sourcing concerns: "We've been well ahead of the game in ethical sourcing for a long time. When you buy a De Beers Forevermark diamond, it has a unique inscription number on it. And it comes with a certificate from the De Beers grading facilities where it was sourced and that there was no child labor, no unfair labor conditions and no environmental damage done."