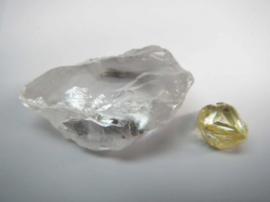 Australia's Lucapa Diamond Company Limited has announced that diamond production in the December 2016 Quarter from the Lulo Diamond Project in Angola was 5,313 carats, an increase of 147% on the corresponding quarter in 2015 and also the highest quarterly production achieved during the Angolan wet season. For the year, Lucapa's production was up 136%, from 8,394 to 19,833 carats recovered. Lulo alluvial mining company Sociedade Mineira Do Lulo (or SML, Lucapa 40% owner and operator) sold two parcels of Lulo diamonds during the Quarter, totalling 4,676 carats for total gross proceeds of $14.6 million, achieving exceptional average prices of $3,111 per carat. The December Quarter sales took total gross sales for calendar 2016 to $51 million at an average price per carat of $2,983 - the highest price per carat achieved for any run of mine diamond production in the world in 2016. SML's unsold diamond inventory stood at 2,938 carats at the end of the Quarter. These diamonds will be included in the next sale, which is scheduled for January 2017.

The December Quarter production included 79 specials (+10.8 carats), up from 28 in the previous corresponding period. These specials included four +70 carat diamonds and a 54 carat gem. The average size of the diamonds produced in the Quarter was 1.9 carats per stone, compared to 1.3 carats in the previous corresponding quarter. The average diamond grade was 10.6 carats per 100 cubic metres (cphm3), up from 5.6 cphm3 in the previous corresponding quarter. Lucapa Chief Executive Stephen Wetherall said the Lulo partners looked forward to building on the exceptional 2016 achievements in 2017 in what loomed as an extremely exciting year: "In 2016, Lucapa and its partners achieved record gross diamond sale revenues of more than US$51 million at an average of US$2,983 per carat - the highest price achieved from any run of mine production in the world," said Mr Wetherall. "As a result, SML ended the year with a significant cash balance and a large unsold diamond inventory of ~ 3,000 carats." He adds,"With our XRT large diamond recovery circuit now fully operational, we look forward to continued recoveries of large top-tier diamonds and strong cash flows in 2017 as we step up our exciting kimberlite drilling and exploration programs, which will soon involve three drilling rigs."