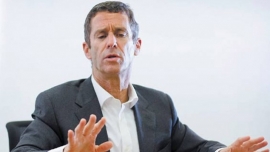 Israeli billionaire businessman Beny Steinmetz was released from house arrest Wednesday after he was detained last month on suspicion of money laundering and bribing public officials in Africa, writes The Times of Israel. The diamond and mining magnate was arrested on December 19 and accused of paying millions of dollars in bribes in the Republic of Guinea in exchange for advancing his business interests in the country, according to the Israel Police. The case revolves around the purchase by Steinmetz’s company, BSGR, of an iron ore mine in in Simandou, Guinea, for which it allegedly shelled out $165 million in exploration costs. It sold half of it several years later for $2.5 billion. According to the allegations, BSGR won the concession for the mineral-rich Simandou range, which had been stripped from the Rio Tinto mining corporation, after Steinmetz cultivated a close relationship with then-Guinea president Lansana Conté, who died in 2008.

The arrest was the result a wide-ranging investigation carried out jointly by agencies from the US, Switzerland, Guinea and Israel in coordination with the OECD. After Steinmetz’s arrest, Asher Avidan, a top executive in BGSR, was also arrested and later released to two weeks of house arrest. BSGR denies it was involved in bribery of a foreign public employee and money laundering. “It is BSGR’s strong belief that these allegations of bribery by the government of Guinea are not only baseless, but are a systematic attempt by the government of Guinea to cover up the endemic corruption which has blighted this country for a number of years,” the company said in a statement after Steinmetz’s arrest. Steinmetz’s BSG Resources previously had its mining license revoked in Guinea because of corruption charges. The joint investigation into Steinmetz’s dealings was conducted as part of an OECD drive to root out bribery of government officials worldwide.