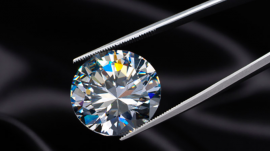 Diamond industry analyst Avi Krawitz presents his thoughtful analysis of the year that was in the diamond industry 2016: "The Year Trust Returned to the Diamond Trade". Among the many significant developments, the most critical he identifies as the diamond distribution chain taking the steps needed to respond to consumers' increasing demand for authenticity and ethical assurances, as, "More companies displayed an ability and willingness to show where their diamonds came from in 2016, be they jewelry retailers, miners, and, most significantly, manufacturers." Providing sourcing guarantees was previously considered too expensive, but now is "becoming a requirement." Many voices throughout the industry have been preaching know-your-client and supplier programs to restore trust in the diamond industry, and he expects, "The trend will continue with more companies coming on board in 2017 so that a diamond and jewelry company’s ability to track their supply becomes an integral part of how the diamond industry operates."

Taking a page out of Time magazine's playbook, which named Donald Trump its ‘Person of the Year', Krawitz suggest that Indian Prime Minister Narendra Modi would be the logical choice for the person who most impacted the trade in 2016. "His bold decision to eliminate 500 and 1,000 rupee notes, taking about 85 percent of currency out of circulation, had an immediate dampening effect on India’s influential diamond trade. Sales in the cash-driven domestic jewelry market fell, as did demand for lower-quality rough and polished diamonds. Demonetization is expected to keep demand in those specific categories muted for at least the first half of 2017. But India’s move to being less cash-dependent makes a tremendous contribution to the legitimization of the diamond trade and will surely result in a healthier market in the long-term." This would be a significant step forward, and, "His attack on cash is in line with a collective move toward greater compliance across the industry."

Modi's demonitization policy not only served as a potential watershed moment for India, but highlights an industry-wide move to greater financial compliance and transparency, which should help ease the high-risk profile under which the banks currently categorize the diamond industry. "About half of De Beers sightholders are now meeting international financial reporting standards, while the rest will need to reach that point in 2017. New tax deals in Belgium and Israel have also lifted a cloud of uncertainty surrounding the trade and are projected to raise compliance, trading and liquidity levels in those centers."

Finally, 2016 witnessed a return to buying profitable rough diamonds. "Diamantaires appear to have learned their lesson from the events that unfolded in 2014/15 when they continued to buy rough despite prevailing high prices," while miners, "also seemed to be more mindful of their clients’ ability to profit. The fundamental business principle that you can only sustainably make money if your clients do too, seems to have sunk in." Krawitz additionally points out concerns that, "the demand-supply balance will be compromised as three new mines – Renard, Gahcho Kué and Liqhobong – came on stream in late 2016," with an estimated seven million additional carats entering the market while polished demand - particularly in China - has not fully recovered; meanwhile, the Diamond Producers Association's generic marketing efforts, which launched fully in 2016, will need some time before it creates a noticeable impact.