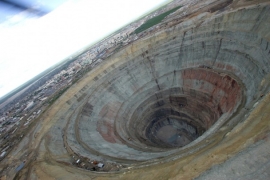 Alrosa has brought the underground mine at its Mir diamond pipe to full capacity, according to Russian news service Interfax. Capacity for 1 million tons of diamond ore was reached at the end of December, and at that rate the Mir pipe can be mined for another 50 years, the company said in a statement. Alrosa described the Mir underground mine reaching capacity as its operating highlight of 2016. The mine can now produce $400 million worth of diamonds a year, it said. The Mir open pit operation was discontinued in 2001. The underground mine produced its first diamonds in 2009. It produced 2,332 million carats of diamonds in January-September, 39% more than in the same period of 2015 and 8% of Alrosa's entire output.

Rough-Polished writes that Alrosa implemented a "dry conservation" project at the mine, a first in the history of the mining industry. The conservation was meant to prevent the ingress of water in underground workings, which is about 1,200 cubic meters of highly mineralized brines an hour. ALROSA achieved this by laying a waterproof film at the bottom of the inactive quarry in 2004, and on top it dumped a drainage bag and put powerful pumps nearby.