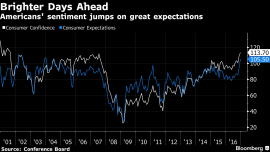 Consumer confidence climbed in December to the highest level since August 2001 as Americans were more upbeat about the outlook than at any time in the last 13 years, writes Bloomberg based on a report from the Conference Board, a New-York based independent business membership and research association working in the public interest. The Conference Board Consumer Confidence Index®, which had increased considerably in November, posted another gain in December: the Index now stands at 113.7 (1985=100), up from 109.4 in November, although consumers’ assessment of current conditions declined in December, while their short-term outlook improved considerably. Judging from Amazon's statement that it just had its greatest holiday season ever - including 10,451 carats of diamonds purchased on the website, with a watch sold every 1.5 seconds - that confidence appears to be turning into sales.

“Consumer Confidence improved further in December, due solely to increasing Expectations which hit a 13-year high (Dec. 2003, 107.4),” said Lynn Franco, Director of Economic Indicators at The Conference Board. “The post-election surge in optimism for the economy, jobs and income prospects, as well as for stock prices which reached a 13-year high, was most pronounced among older consumers. Consumers’ assessment of current conditions, which declined, still suggests that economic growth continued through the final months of 2016. Looking ahead to 2017, consumers’ continued optimism will depend on whether or not their expectations are realized.”