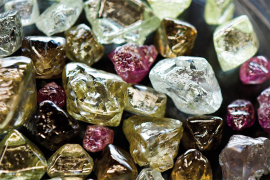 Rough diamond industry analyst Paul Zimnisky, whose Diamond Analytics website brings you the Rough Diamond Index, has assembled a Diamonds 2016 Year in Review quiz. Courtesy of Paul Zimnisky, we invite you, our dedicated readers, to test your knowledge of diamond industry developments in 2016 with this 20 question quiz. Search The Diamond Loupe archive for the answers, or - if you are not feeling up to the challenge - head on over to the Diamond Analytics website and scroll to the bottom of the quiz to find the answers. Good luck, and Happy Holidays!

1. In what country was the world’s largest lab-created gem-quality blue diamond produced this year?
A. U.S.
B. China
C. Russia

2. What Canadian diamond mine was impacted by a processing plant fire in June that disrupted Q3 production?
A. Diavik
B. Ekati
C. Victor

4. What is the name of Quebec’s first diamond mine that commenced production in October?
A. Gahcho Kué
B. Renard
C. Snap Lake

5. Lukoil (RTS: LKOH) sold its 4.5 million carat/year Grib diamond mine to which company?
A. ALROSA
B. Otkritie
C. Rosneft

6. What was the Diamond Producers Association’s approximate initial annual budget to fund its “Real is a Diamond” marketing campaign?
A. $6M
B. $28M
C. $72M

7. In what month did Rio Tinto’s (LSE: RIO) CEO Jean-Sebastien Jacques indicate that diamonds are a priority area of growth for the company on Bloomberg TV?
A. February
B. September
C. December

8. What company postponed it’s December auction as a result of India’s cash shortage?
A. Gemfields
B. Gem Diamonds
C. Lucara

9. Why did Diamond Corp (LSE: DCP) have to halt production at its Lace mine in November?
A. Rain
B. Power shortage
C. Labor strike

12. What U.S. retailer stopped carrying lab-grown diamonds this year after an unsuccessful initial trial?
A. Jared the Galleria of Jewelry
B. Helzberg Diamonds
C. Zales

13. In what city did ALROSA (RTS: ALRS) build a diamond trading center to target Asian customers?
A. Vladivostok
B. Krasnoyarsk
C. Novosibirsk

14. What world-class diamond development project did Rio Tinto walk away from in August?
A. Grasberg
B. Oyu Tolgoi
C. Bunder

17. Chinese super-retailer Chow Tai Fook (HK: 1929) opened its first location in the U.S. in November by partnering with which U.S. department store?
A. Nordstrom
B. Macy’s
C. Neiman Marcus

18. In April, what country did ALROSA indicate has the most potential for new diamond discoveries?
A. Angola
B. Canada
C. Russia