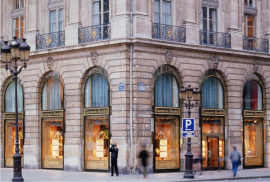 Italian private equity firm Clessidra said it has agreed to sell an 85 percent stake in high-end jeweller Buccellati to Chinese conglomerate Gangtai Group, according to Forbes. The Buccellati family, who in 1919 founded the jeweler famous for its ornate, lace-like creations, will retain a 15 percent stake. A source familiar with the deal said the acquisition gave Buccellati an enterprise value of 270 million euros ($282 million) or 6.6 times its revenues. Clessidra apparently tried to reach an agreement with Cartier owner Richemont CFR.VX after discussing a possible sale of a controlling stake in Buccellati to the Swiss group, but the deal never went through.

Buccellati, founded in Milan in 1919, is one of the most prestigious jewelers in Italy, known for creating pieces using time-honored hand-crafted techniques, writes Forbes. The company has an international presence especially in fashion capitals Europe and the United States with branded stores and distribution agreements, and has seen revenue rise 60 percent since Clessidra bought a 67 percent stake in Buccellati in 2013, the source added. Gangtai Group specializes in the consumer, culture, finance and health industries. Its subsidiary, Gangsu Gangtai Holding (Group) Co. Ltd, is one of largest gold jewelry distributers and a leading internet jewelry retailer in China, and is focused on growing its presence in international luxury, according to the joint statement.