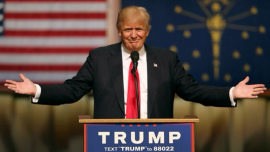 Reflecting on the impact of the Trump election victory on the future of the diamond trade, particularly on the U.S. and India, independent industry consultant Pranay Narvekar writes in GJEPC's Solitaire International that America's share of the global polished diamond market - already the highest by far at 45% of total value - should only increase in the coming years, while the strength of the dollar and other expected policy moves will only exacerbate uncertainty throughout the trade. In this he does not veer far from De Beers' CEO Bruce Cleaver's comments to Bloomberg ("Trump Can Help Spur Diamond Sales Rebound") that the Trump effect is, "likely to be positive, certainly in the short-term - lower taxes, more jobs, translates into more disposable income and translates into more diamond purchases,” but Narvekar goes into much greater detail to explain their likewise shared opinion that a stronger dollar will make diamonds more expensive in other currencies, undermining consumer spend.

Narvekar starts by pointing out the potential for the sharp emotional divisions among U.S. voters, which the election revealed in painful clarity, to split the population-as-consumers into those feeling bouyed by the results and those whose confidence was shaken. "Diamonds and diamond jewellery are luxury products that require the consumer to have a positive frame of mind. Hence, we will see a fractured demand from the US, rather than a more homogeneous one, as was the case earlier. Trump supporters can be expected to spend on jewellery in the season, while the other half who are fearful and uncertain might hold back on their purchases." Given that Trump seems intent on implementing many of his divisive campaign policies, those in the anti-Trump camp will not be feeling confident any time soon.

Addressing some potentially positive effects, Narvekar plays the Ivanka card, indicating that Trump's daughter and confidante, "runs a fine jewellery brand under her own name, and can be considered as part of the industry. This, in itself, may not amount to much; however, it may mean that the President has a sympathetic attitude towards the industry." He notes that Trump has plans to spend on rebuilding infrastructure, which will stimulate the economy, creating jobs and more discretionary income, as well as other short-term stimuli, but adds that, "These actions, however, could have negative effects, even in the short-term. The US currently is running at possibly the lowest unemployment rate in the last eight years. Providing a stimulus at this point would push this rate lower. While the US still has excess capacities, the labour pressures would probably manifest in price inflation," ultimately leading to higher interest rates.

And, "Interest rates rising," he notes, "have another unintended consequence of strengthening the currency. The dollar too has strengthened against most currencies since the Trump election. The Indian rupee has also weakened partly due to this effect, the impact of the demonetisation, and the expected drop in interest rates by the Reserve Bank of India (RBI)." A weaker rupee benefits the export industry and, "might give some breather to the polishing and jewellery manufacturing industry," but, as he adds, "History also tells us that the industry growth is inversely proportional to the strength of the dollar. As diamonds are typically priced in dollars, a strengthening dollar reduces the equivalent sales in other currencies, when converted to dollars. Hence a Strong Dollar = Diamond and Jewellery Industry Weakness." A strong US dollar pushes down consumer spend in markets where sales are mainly in local currency.

Continuing in the US, Narvekar writes, "Given the overall health of the economy and low unemployment, it is likely that this Christmas season will see reasonable growth in US retail jewellery sales," but concludes "at best, we will see flat diamond sales in the US this year. All other markets would show negative growth this year. The US would remain the last growth market standing for the industry." Closing, he reflects on the general uncertainty that comes with an already unpredictable President-elect: "Ultimately the effects felt on the industry will be determined by the policies which President Trump and his team implement. From his appointments, it seems like he intends to implement all his pre-election promises, which is a frightening thought ... For the diamond and jewellery industry, the US market remains, for now, the 'one-eyed king in the land of the blind'. The industry needs the US market and their consumers to remain optimistic in the face of global turmoil, and it possibly will, at least for the next year. The real uncertainty lies in the longer term, where the probability of business conditions not being supportive are much higher than that of a conducive global business environment. We are facing a world which has no precedent." Meanwhile, the Indian diamond and jewelry industry, "will need to remain balanced and not over-extend itself in either debt or inventory. It has to be ready to react to unfolding circumstances."