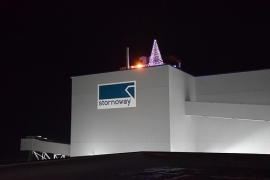 Canadian miner Stornoway Diamond Co. announced it has commercial production at the Renard Diamond Mine. Commercial production at Renard is defined as an average processing rate of 60% of plant name-plate capacity over a 30 day period. This was achieved on December 3, 2016, with an average processing rate of 4,120 tons per day over the preceding 30 day period compared to a name-plate capacity of 6,000 tons per day. Pursuant to the terms of Stornoway’s financing agreements, Stornoway will formally declare commercial production on the first day of the month following the month in which it is achieved, which is January 1, 2017. The company expects to continue the ramp-up of the process plant to full production over the next two quarters.

Matt Manson, President and CEO of Stornoway, stated: The attainment of Commercial Production marks the end of the project’s capital expense period, and our final capital costs are forecast to be comfortably within the reduced C$775 million estimate set out in February 2016. Our production ramp-up continues, with three diamond sales scheduled for the first quarter of 2017.” The company markets its rough diamonds in Antwerp.