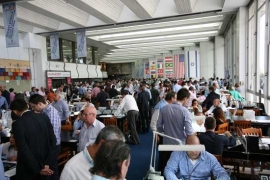 The Israel Diamond Exchange (IDE) has announced the Israeli Diamond Industry has finalized the terms of an agreement with the Israeli Tax Authority. The boards of directors of the Israel Diamond Exchange (IDE) and the Israel Diamond Manufacturers Association (IsDMA) unanimously ratified the agreement on Sunday, while a special assembly of IDE members also endorsed the new arrangement, achieved over a 10-month period of negotiations. One of the outcomes under the new regime is that diamond companies will be taxed on profit rather than turnover, with the result being that diamantaires will no longer pay taxes when they incur losses: they will now be able to deduct all of their expenses from income and will pay tax only when they show a profit. IDE President Yoram Dvash said, “The previous tax agreement , by which we paid tax on turnover even during years of losses , is no more. From now on we will be able to deduct our many expenses and we will pay tax only on profits.”

The IDE further notes that the new tax agreement sets out terms for the Israeli Diamond Industry that are in line with international financial regulations, saying they exect it will now become easier to access much needed lines of credit. Yoram Dvash said that the new agreement greatly reduces the risk factor for the banks and that he expects a significant easing in bank credit. Dvash adds: “This is an historic achievement that will enable us to concentrate on growing the diamond industry. Over the past several months we worked in cooperation with the Tax Authority in total transparency. Our goal is to manage our books and to pay taxes like every other business in Israel. The agreement is truly a win-win situation for Israel and for the diamond sector, which supports thousands of families.” He added that he was confident that the Israeli banks that had sharply raised interest rates and had closed accounts of diamantaires would now welcome their business.

Interestlingly, the nature of this agreement is the very opposite of the one the Belgian Government signed into law only last week for the Antwerp diamond trade. The Belgian system noz stipulates that companies will no longer be taxed on the basis of their profit but on a fixed percentage of their turnover - thereby eliminating complicated discussions with tax authorities about the value of inventory, which is difficult to assess. The Antwerp World Diamond Centre is equally confident that their will give a new impetus to the Antwerp diamond industry and will attract new companies to the diamond capital and assuage the fears of the banks.