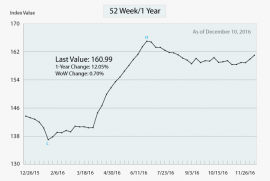 Paul Zimnisky, independent diamond analyst of the eponymous Zimnisky Global Rough Diamond Price Index, writes that rough diamond prices are up 12.1% for the year 2016 through mid-December after major miners' efforts to curtail global supply, combined with a healthy 2015 retail holiday season, have tilted the skewed 2015 balance between over-supply and diminishing demand. Zimnisky writes that after, "Gross over-speculation of global diamond demand growth" leading up to 2015, "which resulted in a significant overhang of low-to-medium-quality polished stock in the industry pipeline, market demand for rough has returned as manufacturers restocked following the 2015 holiday season."

"The supply glut was debilitating, and even fatal" for manufacturers, he writes, "as there was in some cases no market for their freshly polished product which they needed to unload in order to pay back loans used to buy the rough." But by reducing rough supply to the market and reducing prices, mining companies such as Alrosa and De Beers normalized the supply/demand balance and returned profitability to the manufacturers.

Zimnisky writes, "Russian diamond super-major ALROSA lowered prices by 15% in 2015 and built inventory, selling less diamonds than it produced to reduce product in the market." Meanwhile, "De Beers cut rough prices 3% in the spring of 2015 and then again 9% a few months later in August, and curtailed production 12% or ~4M carats in full-year 2015. In January 2016 De Beers cut prices 7%, but then raised prices 2% in April, the company’s first price raise since 2014. Prices have since been unchanged. These four price adjustments net out to -17% over the last two years, comparable to ALROSA’s 15% cut in 2015."

He concludes, "Market demand for rough is clearly up this year as evidenced by the robust uptick in gross sales revenue generated by the two majors." He notes that: ALROSA produced $4.2B in diamond sales so far this year, 21% higher than last year; De Beers generated $5.6B in gross rough diamond sales in 2016 which is up 61% year-over-year.