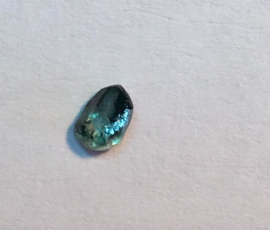 As blue diamonds have been stealing the headlines for their record-breaking prices achieved at auction, Australia's Merlin Diamonds' recovery of a blue diamond from its Merlin diamond operation in the Northern Territory, while small (0.124 carats), portends well, as it, "does demonstrate the potential for valuable coloured diamonds at Merlin and is believed to be the first blue diamond produced at Merlin." The recovery occurred during the ramp-up phase of the Merlin Diamond Project. Merlin Diamonds, formerly North Australian Diamonds, acquired the project from Rio Tinto in 2004.

Merlin Diamonds Ltd., owner of the Merlin diamond mine located 900 kilometres south east of Darwin in the Northern Territory of Australia. was given the green light to re-commence operations in September this year.  Since 1998, nine of the Merlin pipes have been subject to open-pit mining over a 5-year period, producing 507,000 carats of high quality diamonds. The largest diamond ever found in Australia, a 104.73 carat white gem-quality stone was recovered from Merlin in 2002 and was valued at about US$525,000. The current probable ore reserve for the all diamond pipes at the mine is 4.04 million tons at an average grade of 15 carats per hundred tons, representing a total contained 610,000 carats.