Lucara Diamond: Most of 450 Workers Facing Redundancy at Karowe Mine Should Keep Jobs 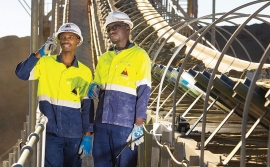 According to an unoffical email statement to Rapaport News, Lucara Diamond Co. expects that most of its employees at its Karowe Mine in Botswana should keep their jobs once a new contractor takes over operations. The response from Lucara CEO William Lamb follows earlier reports that at least 450 miners will be retrenched at Karowe Diamond miner following a decision by owners Lucara Diamonds to prematurely terminate a mining services contract with South African company Eqstra. The operations contract open cast mining services was held with Lucara’s local company, Boteti Mining Proprietary, and ran until December 2020. Boteti is now finalizing a deal with a new contractor following the termination of its agreement with Eqstra.

Rapaport News writes, "The new contractor, which Lucara has not yet named, will be responsible for recruiting its own employees." However, the CEO Lamb, “believes that the Eqstra workforce at Karowe whose employment has been affected will be largely transferred to the employ of the new mining contractor." In the meantime, Lucara has moved to assure shareholders that 2016 throughput will not be affected by the latest development. The move only impacts mining staff responsible for the drill, blast and delivery of ore to the plant, with diamond sorters unaffected.