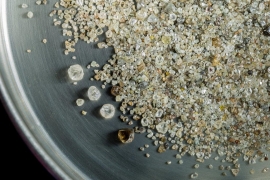 Kennady Diamonds, developer and owner of the Kennady North diamond project in Canada’s Northwest Territories, has announced a maiden indicated Mineral Resource of 13.62 million carats of diamonds contained in 8.50 million tons of kimberlite, with an overall grade of 1.60 carats per ton and an average value of US$63 per carat. The Kelvin kimberlite is located approximately 280 kilometers east-northeast of Yellowknife, and is immediately adjacent to the Gahcho Kué Diamond Mine operated by the De Beers Group and Mountain Province Diamonds Inc. Kelvin was one of several small kimberlite dykes with associated volcaniclastic blows discovered by the De Beers-Mountain Province Joint Venture in 2000, and were only proven to have volume potential after drilling by Kennady Diamonds began in 2012.

President and CEO of Kennady Diamonds Dr. Rory Moore stated: “Our resource announcement represents the culmination of a focused evaluation program that was intensified over the past two years. The internal geology and diamond distribution within Kelvin are now so well-constrained that our model meets the stringent requirements to qualify as an indicated resource. I congratulate our team in taking Kelvin from discovery to a 13-million carat Indicated Resource in the first four years of our company; quite possibly a record timeframe in the history of Canadian diamond exploration.”