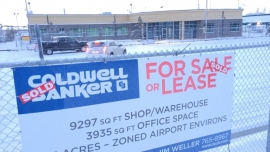 After being shuttered for several years, New York-based company Almod Diamonds Limited says it plans on opening a diamond polishing and manufacturing factory in Yellowknife in as little as three months. The agreement was announced by Industry, Tourism and Investment Minister Wally Schumann Monday morning. “Diamond polishing and manufacturing is something that has created jobs and economic opportunity in diamond-producing jurisdictions all over the world,” said Schumann. “This will give Almod access to NWT-mined rough diamonds for manufacturing here in the NWT. Almod will be taking immediate next steps to set up its operations in Yellowknife. "They have a strong and unique position in the global marketplace and that will allow them to succeed in our territory where others have struggled."

Almod Diamonds has been given approved N.W.T. diamond manufacturer status, which means the company has access to rough diamonds mined in the territory. Diamond mines in the N.W.T. are required to provide 10 per cent of their production to a manufacturer in the territory. Almod Diamonds president Albert Gad said Monday the company will close the purchase of one of the old factories by the airport on Thursday. Ten employees will initially be stationed in Yellowknife, though they will come from the company's other operations around the world to provide hands-on training to local workers, something that usually takes up to two years. Once operational, Gad says the company will also explore the idea of opening up a retail store to tap into the territory’s growing tourism sector. “What better opportunity than to have a diamond cutting facility here?”

Nearly four years ago the territorial government gave approved diamond manufacturer status to Deepak International, a company that also bought an old factory but ultimately never opened it and was sued by its financiers. Almod also has a factory in Namibia, and Gad says when other companies were shutting down their plants there, they were expanding. "We have factories in areas that are challenging and we've been successful doing it," said Gad. The company says it will take at least three months to assess the state of the factory and its equipment, obtain new equipment if needed and assemble staff prior to reopening. Asked why his company will thrive in a jurisdiction where others have struggled to get off the ground, Gad said his company’s track record speaks for itself. “Wherever we do go we’ve maximized our growth … depending on the opportunities that we have,” he said.