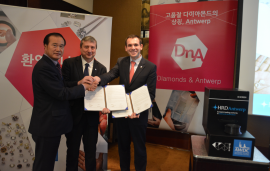 From 11 through 14 December, the Antwerp World Diamond Centre and HRD Antwerp are participating in the City of Antwerp's economic mission to Seoul, South Korea, after which it heads to Shanghai. Highlights of the trip to Seoul include HRD Antwerp's announcement it will be offering bilingual diamond grading reports as of February 1, 2017, with the first reports available in English/Korean and English/Chinese. HRD Antwerp will gradually offer bilingual grading reports in other foreign languages over the course of the next year. The new service, alongside additional design improvements and safety features, is aimed at better informing consumers on the terminology used to describe the diamonds they purchase. Additionally, The Korean jewelry industry will now also be able to use the M-Screen+, the latest version of the acclaimed screening device, which automatically feeds, screens and sorts round brilliant diamonds as small as 0.5 points up to 10 points, with a top speed of 15,000 diamonds an hour and automatically detects whether the diamonds are natural, potential lab-grown/HPHT, colour treated or simulants.

South Korea is a growing market for polished diamonds; it often referred to as an ‘emerging market’, though this is not entirely accurate. South Korea is actually a developed market that also just happens to be fifth on the list of growth markets, right behind the BRIC countries. It also is often listed among the top ten countries in the world with regard to the average level of disposable income, which makes it ripe for increasing its level of diamond and luxury purchases. The government of South Korea has furthermore identified the jewelry market as one of the key sectors for promoting Korean craftsmanship and increasing employment. The City of Antwerp's mission to the east includes the participation Flanders Investment & Trade, the partnership of the Port of Antwerp and the backing of the Belgian Embassy in Seoul.