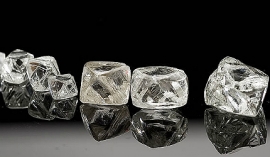 DiamondCorp, the UK-based South African diamond miner that has undergone an autumn of misfortune including fires and floods at its mine, reports soft prices obtained from the sale of rough diamonds recovered from the Lace mine prior to being placed in business rescue: $115.46 per carat. DiamondCorp attributes the lower average price obtained in part to the weaker market in the lowest size goods - a recurring issue in the rough diamond trade since the demonitization of India's INR 500 and INR 1,000 notes - but particularly to the absence of high quality gems amongst the larger stones. "One large gem could just as easily swing the average the other direction," the company states, but unsurprisingly - given their recent string of luck, including a flood at its Lace Mine which shut down the mine and spurred the business rescue - it did not happen.

At the most recent sale the company sold a total of 5,116.6 carats for for $590,744.86, achieving the $115.46 per carat mentioned above. The average carat value achieved for the year has fallen to $146/ct, 11% lower than the $164/ct forecast average. The parcel included five stones larger than 10 carats, with the largest stone being a 19.43 carat non-gem diamond. "Unfortunately, all the larger goods were either non-gem, or contained carbon inclusions or cracks which resulted in reduced valuations." The positive news is that In the size fractions (+7 sieve size) up to 5 carats in size, prices achieved were comparable or better than achieved throughout the year. But as we have been hearing from all the rough diamond miners recently, prices for the smallest size goods (-7 sieve size) were weaker.