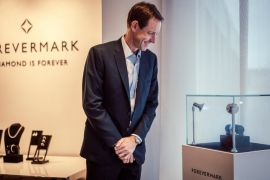 De Beers newly appointed CEO, Bruce Cleaver, sat down with The New York Times regarding Diamonds and Millennials. In October the DPA, Diamond Producers association, launched their highly anticipated “Real Is Rare” campaign, partly funded by De Beers. “The campaign is about millennials; it’s not aimed at the traditional successful couple that you’d see in advertising even five years ago — it’s not about diamond buyers on Fifth Avenue” states Mr. Cleaver.

The long-term economic health of the industry is dependent on ensuring demand throughout the supply chain. Although 95 percent of De Beer’s revenue derives from mining and producing diamonds, they too have understood the importance of millennials as in 2015 the age group reportedly spent nearly $26 billion on diamond jewelry in China, India, Japan and the United States.

“We know that they are invested in the diamond dream, but they don’t like being told what to do, and there is tendency for brands to underestimate them,” Mr. Cleaver said. Adjusting their products to consumers who are striving for their individuality, and are much slower in terms of the traditional life path is one of the main challenges De Beers is currently facing.

The growth outlook for China and India is a key focus, with the company increasing its marketing to help drive sales among the wealthy and aspiring middle-class customers in those countries.

Mr. Cleaver also believes that technological advances in all stages of the supply chain are essential to the industry’s survival. The company has been investing in technologies like accurate automated drilling and blasting and synthetic-diamond detection technology. For retail “we need to get consumers feeling engaged in the purchase process when they come into the store,” he noted. “will 3-D printing change that in the future? I don’t see why not. It’s an overused phrase, but I am cautiously optimistic about 2017 for the business,” he said.