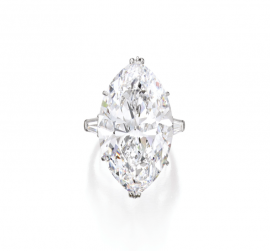 Last week Sotheby’s auction house sold $29.7 million worth of jewelry in 2 separate auctions in New York. The most expensive lot being a diamond ring from the collection of philanthropist Marjorie S. Fisher. The ring being one of over 300 jewels that were sold at auction and once belonged to the late Fisher, whereof many pieces have a distinguished provenance.

According to Sotheby’s, following “intense competition between five bidders on the telephone and in the room,” the GIA certified, 18.04 carat, D color marquise-shaped diamond ring sold for $1.8 million. This surpassed the pre-sale estimate of $1.25 to $1.75 million. Combined, her collection went under the hammer for $10.6 million, surpassing the upper estimate of $9.6 million. This included the rare and iconic ‘Tutti Frutti’ Cartier bracelet, which sold for $936,000, it too surpassing its presale estimate.

Significant lots, other than those from the Fisher collection, included a pear-shaped 18.10-carat, D, VS1 diamond ring, which went for $1.5 million. A cushion-cut, 10.19-carat, D, internally flawless diamond sold for $1.3 million. All three diamonds were sold at Sotheby’s Magnificent Jewels auction on December 8, fetching a total of $25.2 million.