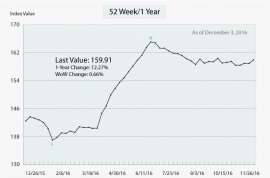 Citing a presentation by Mark Cutifani, CEO of Anglo American, the parent company of De Beers, Rapaport News writes that De Beers' prices for rough diamonds fell 5% this year despite the solid recovery of the rough diamond market. While this seems to contradict reports by analysts such as Paul Zimnisky, whose Global Rough Diamond Price Index currently cites rough diamond prices as being up over 12% in 2016 after a steep climb between March and July, he did write in August 2016, "De Beers' average price per carat sold in the first half of 2016 was $190, down 16.2% versus the same period last year," explaining, "The relative weaker figure achieved by De Beers is most likely a result of a lower-quality product mix sold, mostly attributable to a 17.1% and a 69.5% decrease in Namibia and Canadian production, respectively, the company’s two highest-diamond-quality producing divisions, on an average price-per-carat basis."

Referring to a January presentation by De Beers' CEO Bruce Cleaver, Rapaport presents a similar picture with differing figures, stating, "De Beers rough price index, which monitors prices on a like-for-like basis, fell 6 percent in the first half, with most of the decline seen in January." While the announcement seems to run against the grain of industry sentiment, Kieron Hodgson, an analyst at Panmure Gordon & Co. wrote in a note preceding Anglo’s presentation: “The diamond sector, on average, saw a strong recovery of value in the first quarter, recovering much of the lost ground from 2015, alongside the wider mining sector. While the absolute performance of diamonds has lagged peer commodities, we believe the longer term fundamentals remain robust for price appreciation, albeit with lower volatility.” The charts of a January drop followed by a first half surge bear this out.