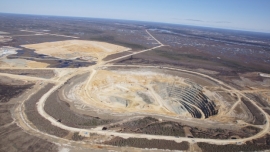 The Wildlands League, a chapter of the Canadian Parks and Wilderness Society, claims De Beers failed to consistently report the levels of methylmercury in the creeks surrounding the Victor Diamond Mine, located near Attawapiskat First Nation. This after raising concerns last year regarding the possibility that the company, or the province, were under-reporting contamination levels. De Beers Group denies the allegations, saying, “To suggest that we have not been reporting per our legal requirements for seven years is grossly misleading. That is simply not true.”

The Victor Mine opened in mid-2008, two decades after the region’s kimberlite field was discovered. The mine is currently the only diamond mine operating in Ontario, and diamonds originating from the mine are known as being amongst the highest quality in terms of both color and clarity.