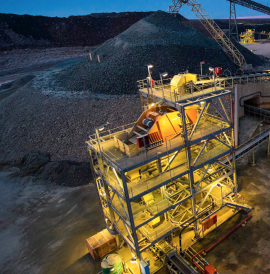 Lucara Diamond has issued a press release announcing that it has indeed terminated its contract with Eqstra Botswana to provide mining related services at its Karowe Mine. However, "Contrary to recent media reports in Botswana, the Company is unaware of any fraud or illegal activities, of its current or former employees, in relation to the mining contract. While the performance of Eqstra under the contract remains a subject of discussion between the parties, an orderly transition to a new mining contractor is underway. Operations on site continue with the plant being fed with stockpiled material from the south lobe. The change in mining contractor is not expected to have any material impact on production."

Just yesterday, mining.mx wrote that "Lucara may have a fight on its hands after Extract Group (which operates through its Botswana subsidiary, Eqstra Botswana) said it would seek damages for a R500m ($3.66m) per year mining contract that was cancelled by the Toronto-listed diamond miner. The contract (held with Lucara’s local company, Boteti Mining Proprietary) was for five years of open cast mining services at Lucara’s Karowe diamond mine in Botswana, ending in December 2020," but the contract, closed in 2014, has been terminated after two years. Both Extract Group and Lucara denied in separate statements reports that there had been improper conduct relating to the performance of the contract. Said Eqstra: “Eqstra Botswana will seek to recoup its damages, in terms of the contract. Discussions are ongoing to minimise job losses in Botswana”. It added that Lucara had through Boteti withheld payment due to Eqstra for work performed in October and November as “a result of irreconcilable differences with regards to volumes mined”. “The company can assure its shareholders that it made all reasonable efforts to resolve the issue in order to progress the partnership in a mutually beneficial way,” it said.