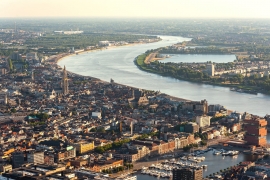 Antwerp's rough diamond trade surged again in the month of November, as the dollar value of rough imports to and exports from the diamond capital rose 60% and 63% respectively compared to the same period in a year ago, according to figures from Antwerp World Diamond Centre (AWDC). These figures essentially seal the positive verdict on Antwerp’s 2016 rough trade, as rough exports for the year (January through November) have risen nearly 10% in carat volume and 11.50% in value; rough imports fared just as well, recording a 10.40% increase in volume and a 10% increase in value. Thus far in 2016, Antwerp has imported $11.3B and exported $11.6B in rough diamonds; imports have risen to nearly 85 million carats, while nearly 93 million carats have been exported from the city's diamond industry. Rough diamond demand across the industry has remained firm throughout 2016, though new mine production adding around 5% to global inventories could put pressure on rough prices, according to a recent report.

Meanwhile Antwerp's polished trade is likely to end the year with the dollar value of imports and exports down slightly more than 9%, with the volumes of those imports and exports falling nearly 8% on the year. For the first eleven months of the year, polished exports and imports remain slightly under $11 billion. The month of November stayed true to these trends. Exports of polished diamonds increased 18% in volume as compared to November 2015, yet still declined nearly 6% in value, pointing to a continuation of the trend of lower prices. The volume of polished imports declined nearly 18% year-over-year in November, leading to a nearly 10% fall in value. According to Panmure Gordon & Co.'s "The Quarterly Carat XII", "abundant inventories and the prospect of increasing rough supplies in 2017 are likely to limit any significant price appreciation near term." They note that the performance of retailers during Diwali, Christmas and the Chinese New Year will hold the key to restocking efforts in early 2017. Panmure Gordon follows the major polished price indices, noting that some have reached levels not seen since the lows of 2010.