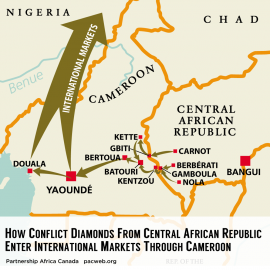 Cameroon is allowing conflict diamonds from the Central African Republic to cross over its borders and into the legal supply chain due to poor controls, smuggling and corruption, Partnership Africa Canada said in a report published today. The report, From Conflict to Illicit: Mapping the Diamond Trade from Central African Republic to Cameroon, investigates the failure of Cameroon’s implementation of the Kimberley Process—the international diamond certification scheme meant to stop the trade of conflict diamonds. The report comes on the eve of the Kimberley Process Review Visit to Cameroon which evaluates the country’s implementation of internal controls that govern diamond production and trade.

Diamond exports from the Central Africa Republic were internationally embargoed after a coup d’état in 2013 sparked a civil war. The Kimberley Process partially lifted the embargo on zones it deemed compliant and conflict-free earlier this year. Yet, Partnership Africa Canada found the illicit trade of conflict diamonds is ongoing. “While international outcry about ‘blood diamonds’ financing war in the Central African Republic sparked action to stop the trade, the same spotlight has not been turned on CAR’s neighbours. Our investigation shows the reality on the ground and how conflict diamonds from CAR still have entry points to international markets through Cameroon,” said Joanne Lebert, Partnership Africa Canada’s Executive Director.

Interviews with miners, traders and exporters detail the smuggling of Central African Republic’s diamonds across the 900km border its shares with Cameroon, corruption amongst officials charged with verifying the origins of diamonds, and large shipments of embargoed conflict diamonds passing through Cameroon’s transit hubs undeclared. The report follows Cameroonian traders who buy diamonds from across the river—in the Central African Republic—and then on to buying houses in Cameroon’s East region. Diamonds are “self-declared” as originating in Cameroon and Kimberley Process Certificates are issued attesting to their conflict-free status, allowing for their export to international markets.

“As the Kimberley Process visits Cameroon, it must take action immediately and demonstrate to companies, retailers—and most importantly to consumers—that it is able to stop the flow of conflict diamonds,” said Offah Obale, Researcher for Partnership Africa Canada, and the report’s author. Partnership Africa Canada calls on the Kimberley Process to place Cameroon under Special Measures which would require a tightening of internal controls within a three month period, during which time no diamond would leave Cameroon without expert and external oversight. The report also calls on a Regional Approach to tackle the illicit trade of CAR’s conflict diamonds, bringing in other neighbours such as Democratic Republic of Congo and Angola, for a harmonized strategy.

While this report will like stir up concern, World Federation of Diamond Bourses (WFDB) president Ernie Blom told Mining Weekly that the volume of conflict diamonds entering the market is currently less than 0.2% of global turnover. Thus, while a small volume of conflict diamonds are still finding their way into the international market, Blom notes that, at less than 0.2%, the industry considers this to be a successful reduction. He acknowledges that despite efforts to tighten export controls, there will always be an avenue into diamond black markets.