Lukoil Sells Grib Diamond Mine in Russia for $1.45 Billion 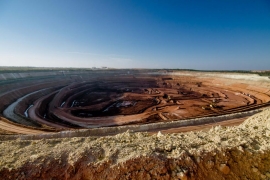 Lukoil has sold its 100% stake in a joint stock company (JSC) that controls a diamond mine in the north of Russia for $1.45 billion. The sale of Arkhangelskgeoldobycha to the holding company behind Otkritie Financial Corporation Bank is expected to go through early next year. The JSC is developing the VP Grib diamond mine in the Arkhangelsk region, which was discovered in 1995. Alexander Matytsyn, senior vice president for finance at Lukoil, said: “We successfully developed a major diamond project from its very early stage and brought the Grib diamond mine to almost full capacity on time and within budget. Spinning-off of this non-core asset allows us to effectively monetize the significant shareholder value that we have created over the past five years.”

Dmitry Romaev, a board member at Otkritie Holding, said: “The acquisition of a 100% stake in Arkhangelskgeoldobycha is a strategic investment in an attractive asset with potential for further development. “This acquisition diversifies Otkritie’s range of business interests as the largest privately-owned financial company in Russia.” Goldman Sachs acted as exclusive financial advisor to LUKOIL. The majority of the mine's production is sold by tender via the Antwerp-based subsidiary Grib Diamonds. Sources said the marketing operation won't be affected by the acquisition.