Debswana On Track For Jwaneng Diamond Mine Expansion, Production in 2017 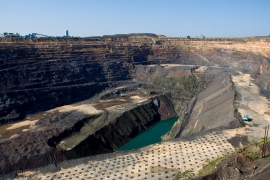 Botswana's Debswana, the world's biggest diamond producer by sales value, is on track to produce its first diamonds from the expanded Jwaneng Mine by next year, a company official said on Tuesday. Known as Cut 8, the $3 billion expansion project aims to prolong the Jwaneng mine's life and produce 100 million carats. “The Jwaneng pit expansion is on track and will start delivering first ore to plant in 2017,” Debswana Corporate Affairs Manager Matshidiso Kamona said. The project involves the widening of the existing pit as an alternative to going deep underground. Debswana is aiming to keep production flat at 20 million carats in 2016. Cut 8 will extend the life of Jwaneng Mine an additional 7 years, ensuring continuous production until at least 2024. The scope of the Jwaneng Resource Extension Project (JREP) involves the delivery of an indicated resource estimate down to 850m below surface, which will then support mining operations for the next 20 years including all key expansion activities such as the Cut 8 and Cut 9 projects.