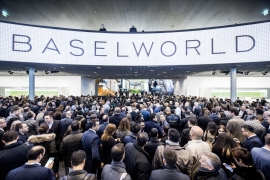 The Timex Group Swiss Luxury Division - which manages the watch business for luxury fashion brands Salvatore Ferragamo, Versace, Versus and Nautica through licensing agreements - is the latest company to leave the Baselworld watch and jewelry show, writes Anthony DeMarco for Forbes. According to Paolo Marai, president and CEO of the division of the Timex Group, the money the company spends participating in Baselworld - $3 million - could be better spent elsewhere. “I think that Baselworld is a huge investment for everybody and is in my opinion losing some effectiveness,” he said. “It used to be very important in different levels. First, it was a good opportunity to meet journalists but they’re coming less and less to Baselworld. And even those who come are reducing the time they are staying—running from one appointment to the next,” he told Forbes.

He continued, “Second, in the past we used to meet a lot of retailers. This year not one single country sent retailers. So what you meet in Baselworld are distributors. But we know the distributors. I don’t need to go to Baselworld for that.” Marai says the changing luxury business demands that luxury brands, particularly fashion brands, need to be closer to the consumer. He argues Baselworld, based in Basel, Switzerland, isn’t an efficient way to do this. He added, “I’m not the only one (leaving) Baselworld. Plenty of brands have decided to step out of there. When the market is suffering I think you need to try something new. It is worth it for us to do something different." DeMarco writes, "Watch, jewelry and gem companies have been leaving Baselworld since the trade show unveiled its $454.5 million upgrade to the Messe Basel fair complex in 2013. The new renovations came with hefty price increases for exhibition space as the trade show began positioning itself as a luxury event."

He adds that the decline in participatnt is not limited to Baselworld, noting that trade shows such as the Hong Kong Jewellery & Gem Fair, the world’s largest fine jewelry trade fair, reported attendance declines for two consecutive years, while U.S., JCK Las Vegas (the largest jewelry trade show in North America and at one time the largest in the world) has never fully recovered from the 2008-2009 global recession.