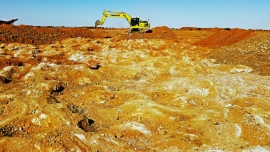 Rockwell Diamonds, the troubled South African junior miner in need of a comprehensive operational turnaround, has stated in an interim update that a sale process in respect of Remhoogte/Holsloot and Saxendrift mines is now well underway. The proposed sale, as announced earlier this month, is designed to, "Reduce the overall operations footprint by disposing of any assets that do not fit the business model." The company adds that, "The materiality of the proposed transaction to the remaining assets is not considered to be of such a size as to require shareholder approval." The turnaround plan also includes measures to accelerate production at the Wouterspan mine to full volume of 200,000 cubic meters of ore per month. A plan to move its Holsloot processing plant to Wouterspan North will also increase monthly output by 60,000 cubic meters.

Rockwell grabbed unfortunate headlines in late September when it announced a shakeup in its management structure, with incoming chief executive Tjaart Willemse stating that the miner was in a “state of despair”. This came after a strategic review produced disappointing results, with the company recording a loss in fiscal Q2 as sales fell by 36 percent. The 'turnaround plan' also entails securing adequate and timely cash investment to facilitate the procurement of capital items and supplement cash flow for the first five months. They confirmed that commitments for US$8M have been secured, by means of additional funding on similar terms to the current loans. This plan will enable Rockwell to perform the necessary upgrades to equipment and infrastructure to implement its turnaround plan.