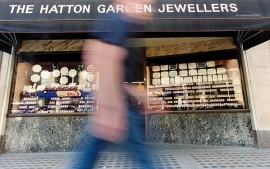 London's Hatton Garden jewelers are planning a potential move away from the famous quarter to establish a new centre in suburban London, writes the Evening Standard. "Industry leaders are discussing the creation of a 'new Hatton Garden' as jewelers face being forced out of their historic Farringdon home by rising rents." ES's Tom Powell says that Victoria McKay, COO of the London Diamond Bourse, told ES the district’s businesses agreed they must begin looking at potential new homes in cheaper locations. Ms. McKay said she wants to create a world class diamond and jewelry hub outside the city centre which mirrors the success of similar projects in Tel Aviv and Johannesburg. Apparently the Bourse’s 300-plus members recently voted strongly in favor of starting discussion of a mass departure to more affordable climes.

She told the Standard: “It’s an incredible shame that Hatton Garden has become so expensive for businesses that a lot of them can no longer afford to be here. We are desperately trying to stop the industry fragmenting. My aim is to create a world class diamond and jewellery hub somewhere in London that will become a new Hatton Garden. There could be traders, workshops, apprentice schemes and new business developments all in one home, making it a real destination. It could create a narrative around the industry and the catalyst that it really needs.” Rents in the area are said to have doubled in the last three years. Chairman of the National Association of Jewellery, Simon Johnson, said: "The London Diamond Bourse as an institution has been a vital and integral part of the UK's  jewellery trade and resided in Hatton Garden for 76 years ... "Unfortunately wider circumstances, including the local and national economy have forced it to assess a potential move from its historic home in London's Hatton Garden." McKay said any move would take some time, “The 92 per cent mandate gives us the ability to go into full consultation but this is a slow move, a five to ten year project. We would need to get a purpose-built facility or renovate somewhere that is already in existence.”