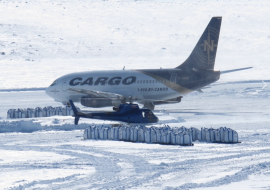 Back in May 2016, Canadian diamond exploration and development company Peregrine Diamonds announced a maiden Inferred Mineral Resource estimate of 4.23 million carats for the CH-7 kimberlite pipe at it's 100% owned Chidliak Diamond Project, Nunavut, Canada, with an overall average grade of 0.85 carats per ton, bringing the combined Inferred Mineral Resource for the CH-6 and CH-7 kimberlites of Chidliak to 15.62 million carats, raising its resource estimate by 37% over its prior analysis. Two months later, Peregrine president Tom Peregoodoff called attention to the need for building a $95 million (US$70m), 160 km all-weather road to Iqaluit, the mine’s closest town. Now, mining.com writes, "Undeterred by transportation challenges at its northern Canadian diamond property, Peregrine Diamonds is about to open its wallet for the next phase of exploration."

Nunatsiaq News reports Peregrine Diamonds executives have told Iqualuit City Council they are prepared to spend C$15-$17 (US$ 11-12.5) million to conduct bulk sampling, core drilling and prefeasibility studies million this season developing the Chidliak mine, and has asked the City of Iqaluit to groom a road that would allow the company to access the Iqaluit-Chidliak trail. Peregrine Diamonds estimates the mine, once fully operational, would create between 275 and 325 jobs, shared between the two closest communities of Iqaluit and Pangnirtung. Peregoodoff estimated that his company has spent about $23 million in Nunavut so far in the project, with the bulk of that money spent in Iqaluit. "The road in is a critical piece of infrastructure and we need that prior to commencement of construction to minimize our construction capital costs," Peregoodoff, said in July. Of the CH-6 and CH-7 pipes, Peregoodoff told the city council “This is just two of the 74 kimberlites. We believe that there will be more kimberlite proven to be economic and that the mine life will be extended [beyond a 10-12 year lifespan].” The next phase of Peregrine Diamonds work at the Chidliak site is set to begin in February 2017, continuing until spring.