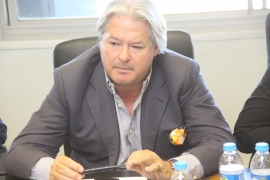 Controversy is brewing in Namibia about who is selling their diamonds to whom, for how much, and whether the country is obtaining fair value from its precious resources. The Namibian newspaper previously raised concerns that a new government independent sales company called Namib Desert Diamonds (Namdia), which is designated to sell stones worth over an estimated US$150 million (N$2.1 billion) per year as stipulated by a 10-year agreement between De Beers and the Namibian government, is allegedly operating without the desired level of transparency when it comes to selling Namibian resources. The arrangement leading to the creation of Namdia states that Namdeb Holdings (the De Beers-Namibian company) will provide US$430 million of rough diamonds annually to Namibia Diamond Trading Company (NDTC), which will channel 15% of these diamonds to Namdia. And indeed, mines minister Obeth Kandjoze said that, "Namdia received its first purchase entitlement from NDTC during September. It received 15%.” Asked whether the stones have been sold, the minister replied, “Yes, the company sold the entire diamonds received from NDTC”. To whom they were sold he declined to say.

The Namibian's investigative unit has since uncovered and published in articles last week that: "New state owned company Namib Desert Diamonds (Namdia) has deliberately sold the country's diamonds cheaply to Dubai – five times less than the price they eventually fetched in the Middle East. People familiar with the industry told The Namibian this week that Namdia sold the diamonds here for US$500 (around N$7,100) a carat. But the same diamonds were then sold on for US$2,500 (N$35,600), per carat. Namdia's board chairperson Shakespeare Masiza did not respond to questions sent to him on Wednesday, but experts said the company has so far had two transactions of diamonds, selling to companies in Dubai since it started operating in August this year. Namdia used a former De Beers middleman - Neil Haddock - now based in Dubai to facilitate the sale of Namibia's diamonds there. The Namibian understands that Namdia sold the diamonds cheaply, despite the higher valuation of those diamonds in Namibia."

Middleman Haddock of Global Diamond Tenders is no stranger to controversy, prompting questions as to why Namibia did not learn from Zimbabwe's experience with Haddock as documented in 2014 in The Mail & Guardian: "Anxiety gripped government and mines ministry officials in March after Global Diamond Tenders, a Dubai-based company hired to facilitate the sale of Zimbabwe’s diamonds, failed to timeously remit revenue generated from the sale of diamonds at the Dubai Diamond Exchange. The country was to pocket nearly $29.3-million from the sale of its Marange gemstones, but only received the total payment at the end of April – nearly 30 days after the auction was held. “This delay has had a negative effect on companies because they were expecting payment immediately after the sale,” said Mark Mabhudhu, the acting chief executive of Marange Resources. “Usually the payments should come after a few days like what happened with the Antwerp, Belgium tenders, but this one took a month.”

Global Diamond Tenders apologised to the state and diamond mining companies in Marange, explaining that it had problems in transferring the funds. The response, however, did not soothe the government’s anger over the auctioneer’s conduct, and there are strong indications from top government mining officials that Global Diamond Tenders may not be hired to conduct future auctions on Zimbabwe’s behalf in Dubai." Haddock was allegedly paid US$580 000 (N$8.2 million) in consultancy fees for handling Zimbabwe's diamond auction in Dubai. Meanwhile, Namibian diamond export data seen by Khadija Sharife from the Organised Crime and Corruption Reporting Project – an investigative journalism organisation – showed alleged misinvoicing for a parcel of diamonds originating from Namibia in the second quarter of 2016, again to Dubai. "Haddock is mostly based in Dubai, a location notoriously known for undervaluing diamonds from Africa," writes the newspaper.

Today, The Namibian reports that Namib Desert Diamonds (Namdia) denied selling the country's diamonds cheaply to Dubai. Namdia's board chairperson Shakespeare Masiza said the new parastatal sold its diamonds on an arms-length transaction basis between September and October (a business deal in which the buyer and seller act independently with no interest in the other's benefit). In response to the The Namibian's claims detailed above, Masiza says: "Namdia did not undersell its purchase entitlement. Namdia has not and will not engage in any illicit business. The purpose of Namdia is to independently discover the true market value of Namibian diamonds, and to report to the shareholder what we have discovered in order for government to inform its national resource optimisation strategy," adding that, "Casting aspersions over Namdia's objective with tags like illicit financial flows seek to undermine the genuine pursuit of price discovery, and makes one wonder in whose interest you wish to report such." Experts questioned why Namdia used Haddock as their marketing and sales consultant because it will defeat the alleged price discovery mission, as Haddock works for the same institutions Namdia wants to be independent from.

Mines minister Kandjoze defended Namdia at a press conference on Friday. At the event, the minister was flanked by diamond officials from government such as Namdia's acting chief executive Kennedy Hamutenya, middleman Neil Haddock and Chris Nghaamwa, the chief legal adviser in the attorney general's office. "Namdia is not a vehicle for self-enrichment for middlemen or existing buyers of our diamonds through the De Beers sightholders system," the minister said, though concerns are widening that it is preceisely that. Kandjoze also defended the decision to appoint C-Sixty Investment to evaluate their diamonds, a move which has also come under criticism as being a hand-picked extension of "a cabal of top politicians, top officials and their cronies who are strategically placed to benefit from Namibian diamonds."