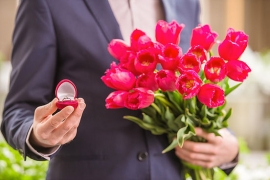 Two investment bubbles, 340 years apart, provide living proof of Edmund Burke’s famous observation that those who do not know history are doomed to repeat it. Rough diamond broker and founder and president of N.Rothmann, Nurit Rothmann recounts the history of two remarkably similar speculative bubbles: the spectactular rise and sudden collapse of the tulip market in 1637 and the rough diamond market in the late 1970's and early '80s. Reprinted here by special arrangement.

In 1554 Ogier de Busbecq, the ambassador of Holy Roman Emperor Ferdinand I to the court of Suleiman the Magnificent, the Sultan of the Ottoman Empire, returned to Vienna from Constantinople carrying the first tulip bulbs ever seen in Western Europe. Little did he know that this simple act would set off a chain of events resulting in the first speculative bubble in recorded history. It would become known as Tulip Mania.

Tulips literally began popping up from Vienna to Augsburg, and all the way west to the shores of the North Sea. However, their transformation into the national flower of the country with which they are today most closely associated, the Netherlands, began in 1593. That happened after the Flemish botanist Carolus Clusius published an academic paper at the University of Leiden that showed that the plants were unusually able to tolerate and adapt to the difficult and harsh weather conditions of the Low Countries. However, that was not the only reason for their growing popularity. Their intense colors provide them with a noble appearance, turning them into sought-after status symbols.

All this was happening during a period when Holland was at the height of its economic prowess. The overabundance of wealth held by its citizens coupled with a mismatch of supply to demand led to the price of tulips doubling from year to year. And, as the economic benefits of the trend became more obvious, the number of individuals getting in on the action rose exponentially. Flower auctions were taking place everywhere in Amsterdam, Haarlem and other Dutch cities. People were taking loans to trade in futures, which essentially meant buying plants that had not yet grown, let alone bloomed. Contracts could be purchased one day and sold the next with a sizeable premium. It seemed that prices could go nowhere else but up.

At the height of Tulip Mania, in the winter of 1637, certain single tulip bulbs were being sold for more than 10 times the annual income of a skilled professional. But then, suddenly and without warning, a rumor spread about one specific type of tulip not finding any buyers at auction. The startling news spread quickly and panic set in. Like all bubbles eventually do, this one too had burst. Investors were left with little more than handfuls of dry and almost worthless tulip bulbs.

The rise of Diamond Mania

For diamond industry old-timers, the story of Tulip Mania will rekindle still-traumatic memories of the diamond investment bubble in the late 1970s and early 1980s. It essentially began in 1976 when the Israeli government, which at the time was anxious to attract foreign currency through the quick development of its country’s diamond industry, began supplying huge amounts of capital to commercial banks at very low interest rates. By passing the discount onto their clients, it was hoped that the Israeli diamond sector would manage grow inventory, and consequently exports.

As part of the new policy, U.S. dollars brought into Israel through the sale of diamonds received more favorable exchange rates. This made speculating in rough diamonds a particularly attractive prospect, resulting in the creation of apparent demand for rough, which bore no relationship to what was happening in the polished diamond market. And because prices were rising so rapidly, it made sense for companies to simply re-trade boxes of rough rather than to cut and polish them, because in the polished diamond consumer markets there was no certainty that they would get a viable return. Making matters worse, the standard practice at the time was for a diamantaire to deposit his rough in a bank as collateral for a low-interest loan, which then was mainly being used to buy more rough diamonds. Israel’s three main diamond-financing banks were holding enough over-valued inventory to threaten the stability of the global market.

The fever which began in Israel spread to Antwerp and New York, and also began catching the attention of speculators in the investment community. Diamond investment firms began opening up in the United States and Europe, promoting one carat and larger polished diamonds, sometimes with buy-back agreements. In March 1977, a 1-carat D flawless diamond was selling in the trade for $7,200. Three years later, in March 1980, that same stone could fetch more than $60,000.

De Beers’ actions, coupled with the onset of a severe economic recession in the United States and Western Europe, led to the deflation and ultimate bursting of the speculative bubble. Equilibrium was eventually reestablished in the rough diamond market, and the prices for high-quality polished stones also began returning to more reasonable levels. Between March 1980 and September 1981, the value of a 1-carat D flawless diamond literally halved. By September 1985, it was selling at about 20 percent of its price just four years earlier.

But the effect on the diamond sector was devastating. Hundreds of companies that were holding onto debts, sometimes worth multiples of their inventories and receivables, were forced to declare bankruptcy, among them some of the most well-known names in the industry. Recovery did not come until about 1987, this time for all the right reasons; namely, the massive growth of a diamond-jewelry buying culture in Japan.

Investment prospects for a non-commodity

The popularity of a diamond as a means of investment in the late 1970s coincided with general growth in the commodity investment market. But the fact is that diamonds have always had difficulty in conforming to the profile of a typical commodity. Commonly, commodities are products that can be bought in bulk, and usually do not have any, or at the very least have very few distinguishing characteristics among individual units of the item. A general requirement for a product to be treated as a commodity is that units can be mutually substituted.

For example, copper and oil are commodities, where the price per unit changes almost daily across the globe, according to supply and demand on various commodity markets. The number of copper and oil categories are very limited. In contrast, a car is not a commodity because cars are produced in numerous different quality levels and in varying types. The same essentially is true of diamonds.

When rough diamonds arrive from its mines, De Beers’ Diamond Trading Company sorts them into more than 11,000 different categories according to their size, shape, quality and color. Polished gem-quality diamonds come in hundreds of different categories, based on the particular permutations of caratage, clarity, color, cut and shapes of the stones. It is virtually impossible to substitute one diamond for another – indeed, it is less viable to substitute one unit for another than it is in the car business. It is almost impossible, therefore, to qualify diamond as a commodity.

But despite this fact, as well as the trauma of the investment bubble of the 1970s and 1980s, many diamond dealers still fantasize about selling their products as they would a commodity, believing that this will open another sales avenue. This is not to say that diamonds do not have investment value. They most certainly do, but mainly as a preserver of wealth. When the diamond business works properly, diamond prices are non-volatile; they rise slowly and steadily, hopefully at a few ticks above the rate of inflation.

The anchor of the diamond business remains the jewelry market, and the bridal jewelry market in particular. In the United States, the country that is responsible for more than 40 percent of all diamond sales, up to 85 percent of all diamond jewelry is associated with matrimony. It is also worth remembering that while that economies ebb and flow, and speculative bubbles inflate and then deflate, young people continue to get married. And when they do, they generally buy diamonds. Our primary mission is to make certain they continue doing so.

Nurit Rothmann specializes in brokering major rough diamond deals, managing diamond tenders, publishing analytical reports of the rough diamond market and promoting, branding and logistics managing of diamond projects. She is the co-founder and previous owner of Bluedax rough diamond broker, co-founder of the Women Diamantaires Forum in Israel, a former columnist at "Ha'Yahalom" Magazine and founder of the prestigious column “The Diamantairesses". She adds: "For those who are interested in learning more about the disturbing but fascinating story of the diamond investment bubble of the 1970s and 1980s, I would recommend that you read “An Economic Review of the Past Decade in Diamonds,” written in 1988 by William E. Boyajian, the then-president of the Gemological Institute of America. It was published in the Fall 1988 edition of GIA’s Gems and Gemology."