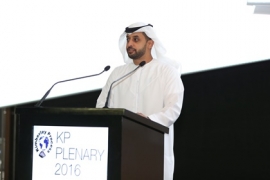 The Kimberley Process (KP) Plenary held in UAE this week concluded with the announcement that  that it has appointed the European Union as its Chair for 2018. The EU will assume responsibility as KP Vice Chair in 2017 with Australia as Chair, and India will be the Vice Chair in 2018 when EU becomes the organisation’s Chair. Consequently, in 2019 India will become the KP Chair.