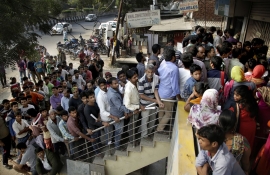 "Uncertainity looms large over the world's largest diamond cutting and polishing industry in Surat following the scrapping of the old Rs 500 and Rs 1,000 currency note by the government," writes the Times of India (TOI) on the sudden currency ban. Demonization of the larger bank notes is causing chaos throughout India as people are trying to exchange their old currency notes for new one or hard assets, having a severe knock-on effect on small diamond traders who deal mainly in cash. The diamond industry, which was supposed to open after 20-day Diwali vacation on November 21, is likely to extend the vacation period till December 15. However, the big diamond companies are scheduled to open their units from November 18 as most of their business is done through banks, TOI adds. Industry sources said that Angadia firms [couriers of money and jewelry] have decided to reopen the first week of December. Angadias are the backbone of the industry, especially for the small and medium diamantaires dealing in cash and chitthi system.

Managing director of Dharmanandan Diamonds, Hitesh Patel said, "The scrapping of old notes has cast a dark shadow on the small and medium diamantaires and traders in Surat and Mumbai. The diamond business is done in cash and almost all the traders are running here and there to convert their old notes into new notes."
Patel added, "The big diamond companies will reopen from November 18. The diamond business of the big companies will not suffer as their dealings in export and import are through banks." Sources said that the scrapping of old notes is all set to phenomenally decrease the demand of small-sized diamonds in the domestic market. "There is no point in opening the units early, because the demand for diamonds in the domestic market has been hit hard. Consumers are not buying diamonds, instead they prefer gold as exchange for their old currency notes. It will take around four to five months for the normalcy to return in the industry," said diamond manufacturer, Chandu Sheta. Sources said that the small and medium diamond units have conveyed to their workers in Saurashtra to return after December 1.