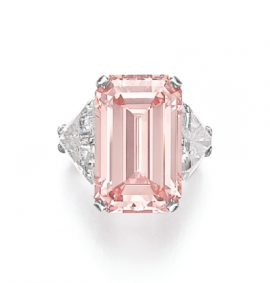 With all the hype going to an 8.01-carat fancy vivid blue diamond under the name, “Sky Blue Diamond,” a lead item at Sotheby’s auction of Magnificent Jewels and Noble Jewels in Geneva held tonight, a ring set with a step-cut fancy intense pink diamond weighing 17.07 carats, between triangular diamonds, stole the show, selling for $20.8 million - obliterating the estimate high of $14.75M. From an important private collection, this pink diamond is of Natural Colour, with VVS1 Clarity and the potential to be internally flawless. While nearly double the size, the stone just managed to top the fancy vivid pink pear-shaped 9.14-ct diamond sold only yesterday for $18.2M at Christie's. The "Sky Blue", which some though may reach $25 million, sold for $17 million.

David Bennett, worldwide chairman of Sotheby’s International Jewellery Division, said, “The Sky Blue Diamond is of a wonderfully clear celestial blue, presented in an extremely elegant square emerald cut—in my view, the most flattering of all the cuts for a colored diamond.” The 14.62-carat “Oppenheimer Blue” diamond, the largest fancy vivid blue diamond ever offered at auction, set a world auction record, selling for $58.2 million at Christie’s Geneva in May, setting a world record for any jewel sold at auction.

The exceptional prices achieved by these exceptional - and extremely rare - investment diamonds have gone through the roof in recent years. In addition to the record-setting Oppenheimer Blue, in November last year, the 12.03-carat “Blue Moon of Josephine” sold for $48.4 million at Sotheby’s Geneva, setting a world record for the price per carat for any diamond or gem at just over $4 million. The 9.75-carat Zoe Diamond sold for more than $32.5 million at Sotheby’s New York in November 2014, and the 10.10-carat Millennium Blue Fancy sold for more than $31.8 million at Sotheby’s Hong Kong in April 2016. Just this past June, tthe Cullinan Dream sold for $25.3 million; it is the largest and most expensive fancy intense blue diamond ever sold at auction after going under the hammer at Christie’s New York Magnificent Jewels. Yet another blue set a new record for any deep blue diamond this evening - $13.7m. It is an oval fancy deep blue diamond weighing 7.74 carats, between shield-shaped diamond shoulders.