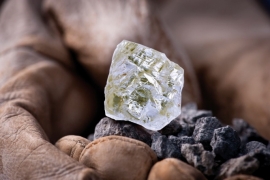 The Foxfire diamond is the largest known uncut, gem-quality diamond mined in North America. The diamond will be on display for three months at the Smithsonian’s National Museum of Natural History, Nov. 17 through Feb. 16, 2017. This will be the first time it has been made available to the public. Weighing more than 187 carats, the Foxfire diamond will be presented alongside the renowned Hope diamond in the Harry Winston Gallery.

“The Foxfire is truly exceptional, one of the great treasures of the Earth,” said Jeffrey Post, curator of the National Gem and Mineral Collection. “We are delighted that our visitors will have this once-in-a-lifetime opportunity to view North America’s largest gem-quality diamond in its natural form.”

The Foxfire diamond was unearthed in August 2015 at Diavik Diamond Mine in the Barren Lands of Canada’s Northwest Territories, approximately 130 miles from the Arctic Circle. The Foxfire was named after the aboriginal description of the resplendent northern lights that light up the Arctic sky like a brush of undulating fox tails. When the Foxfire was discovered, large, gem-quality diamonds were not believed to exist in that area, as the diamonds found over the previous decade generally peaked at six carats. Because of this, the mine’s equipment was configured to sift out stones smaller than six carats while pulverizing the larger ones. The 187.63 carat Foxfire should have been crushed, but its uncommonly flattened shape enabled it to safely pass through the filters.

In June 2016, the Foxfire Diamond was acquired in an international auction by Deepak Sheth of Amadena Investments LLC/Excellent Facets Inc. In electing to preserve the diamond intact, Sheth has maintained both the diamond’s dazzling physical characteristics and its unique story. “Having North America’s largest known uncut, gem-quality diamond on display at the Smithsonian is a testament to the rarity of the Foxfire diamond,” Sheth said. “It also represents another significant chapter in the diamond’s remarkable story.”

The National Museum of Natural History is one of the most-visited natural history museums in the world. Opened in 1910, the museum is dedicated to maintaining and preserving the world’s most extensive collection of natural history specimens and human artifacts.

Check out the Foxfire's own webpage.