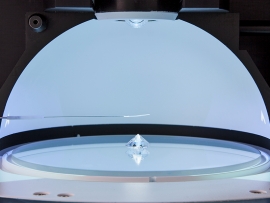 Diamond manufacturing technology company Sarine Technologies announced in a press release the unveiling of it, "new groundbreaking technology for clarity and color grading", which it claims, "will revolutionize the way the diamond industry and consumers perceive clarity grading, and transform the polished sourcing and sorting process ... Technological standardization translates into greater credibility for the industry and increased trust for the diamond consumer." They say while carat size has traditionally been the only objectively measurable factor of the 4C’s in diamond grading, Sarine now claims to provide a scientific solution for color and clarity. Automated grading of cut has long been available through its ‘Diamension’ systems.

Sarine describes its innovations as, "first-of-its-kind, automated, objective and consistent Clarity and Color measurement and grading systems." The company - which is currently in advanced large-scale testing in India with commercialization expected towards the middle of 2017 - initially presents an "accurate and objective" mapping of a diamond’s inclusions and flaws. It then applies a set of algorithms to determine the appropriate clarity grade, using generally accepted standardized grading terminology, the company explained. The machine can handle polished diamonds from 0.02 carats to 10 carats in size. The first version of Sarine Color system, which is also being tested in India, will be limited to stones of 0.20 carats and larger, Sarine said.

De Beers, GIA and HRD Antwerp are reported to be developing similar automated capabilities for their respective laboratories.