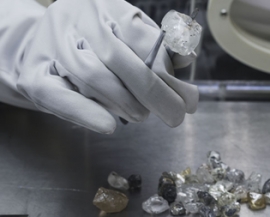 Gem Diamonds, a leading producer of high-value diamonds, reports that it recovered 15% fewer diamonds in Q3 (24,388 carats) at its Letšeng mine in Lesotho than in Q2 (28,682 cts), representing a 17% decline compared to Q3 2015. The company cited "the worst weather conditions experienced since the Letšeng mine opened,” limiting its access to the pits, as the reason for the decline. During the quarter, Gem held three tenders with 37,990 carats sold for a total value of $61.5 million, achieving an average price of $1,619 per carat. "The lower average dollar per carat achieved is a consequence of a continued deficiency of high quality large diamonds rather than a decrease in demand for these diamonds or a weakening of the market in terms of price. Overall, prices of the production sold remained firm." Gem Diamonds sold 12 diamonds achieving more than $1.0 million each in the sales period, for a total of $24.5 million. For the year to date, the average price achieved is $1,785 per carat, reflecting fewer than expected +100 carat diamonds recovered.

At the Ghaghoo mine in Botswana, Gem Diamonds recovered 7,720 carats of rough diamonds during Q3, a 22% decline from last quarter and a 76% drop from Q3 2015. There were no sales of Ghaghoo goods during the sales period. Gem Diamonds' CEO, Clifford Elphick commented on the third quarter results: "Letšeng remains on track to achieve all of its guided production targets for 2016. This is despite production interruptions during July and August due to the worst weather conditions experienced since the Letšeng mine opened. Prices achieved for Letšeng's high quality diamonds have remained robust... However, the continued paucity of large high value diamonds during the Period has resulted in an average tender price year to date of $1,785 per carat. At Ghaghoo, ramping up production levels and reducing costs has seen positive progress being made. There have been encouraging signs of larger diamonds being recovered as mining has progressed into the undiluted portions of the kimberlite ore."