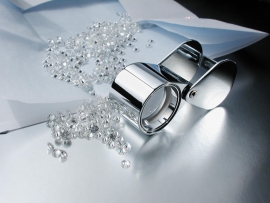 According to Rapaport News as gathered from U.S. Census Bureau data, U.S. polished diamond imports surged 33% to $2.18 billion in September. In terms of volume, imports rose 7% when compared to September 2015, with 988,097 carats being traded. The average price for polished stones increased 24 percent over last year to $2,202 per carat, giving some perspective to Rapaport's earlier analysis of polished diamond prices in 2016 remaining "stable" in September prior to their "decline" in October. During the first nine months of the year, polished imports and exports have increased by the slightest of margins: imports increased 0.6% to $17.8 billion while exports increased 0.8% to $14.48 billion. Meanwhile, rough diamond imports increased significantly to $173 million, while rough exports slid 20% to $12 million, Rapaport reports.