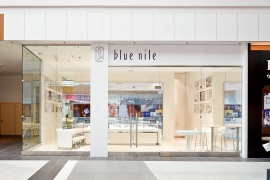 In a surprise announcement, online jeweler Blue Nile said Monday that it has entered into an agreement to be taken private by an investor group comprised of funds managed by Bain Capital Private Equity and Bow Street LLC, writes Anthony DeMarco for Forbes. The all-cash deal is valued at $500 million. He points out that the announcement came at the same time that Blue Nile released its third-quarter earnings report, in which Blue Nile reported profit plummeted 35 percent to $1.3 million and a year-over-year net sales decrease of 4.3 percent to $105.1 million in the third fiscal quarter that ended October 2. The report was issued without comment and a conference call scheduled for Monday was abruptly canceled. Blue Nile has a 30-day “go-shop” period, during which it can solicit alternate proposals, the company said. It is expected to close in the first quarter of 2017. Blue Nile shares jumped 32 percent in pre-market trading.

According to a joint statement issued by the company, the deal is as follows: The terms of the all-cash deal provide substantial value to Blue Nile's stockholders. The Investor Group will acquire 100 percent of the outstanding shares of Blue Nile common stock for approximately $500 million. Blue Nile stockholders will receive $40.75 in cash per share, representing a premium of approximately 34 percent over Blue Nile's closing price on November 4, 2016. Blue Nile Chairman, CEO and President Harvey Kanter: "Since its inception, Blue Nile's guiding principle has been to provide value to its customers, suppliers, and shareholders, and this transaction provides tremendous value to all. Blue Nile will continue its innovative drive that has disrupted the diamond industry and made us the smartest, easiest, and most pressure-free way for consumers to buy a diamond."

Ryan Cotton, a Managing Director at Bain Capital Private Equity, says: "This is an opportunity to acquire a true disruptor in a fundamentally attractive and growing segment of the diamond industry. Blue Nile provides a clearly superior consumer value proposition and offers a convenient delivery model that enables choice and selection in a no-pressure environment. We believe the company will continue to grow as educated consumers continue to seek easy and convenient shopping experiences that deliver transparent pricing and enhanced value."