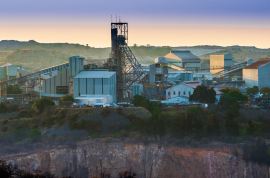 Ilan Solomons takes an in-depth look for Creamer's Engineering News at the progress Petra Diamonds is making on the $295 million C-Cut Phase 1 expansion project, which will initially extend its Cullinan diamond mine’s life span by about 15 years. The C-Cut project will consolidate the areas the company is mining from eight down to three and should reduce production costs by approximately 30% over the next two or three years. A new winder system has been commissioned at Cullinan, which when completed, "will improve efficiencies and reduce the number of times that ore is rehandled from fourteen times to three." Cullinan’s new $118 million processing plant will ensure improved diamond liberation once in operation, such that the RoM grade should increase to between 38 carats per hundred tons (cpht) and 40 cpht in the 2017 financial year, and is predicted to further improve between 49 cpht and 51 cpht by the 2019 financial year, when the C-Cut is set to reach full production. Petra previously announced that diamond production across it mines is increasing by 30% in 2017.

Solomons writes, "Petra is undertaking the current expansion project to increase the mine’s production from 729,496 to 2.2 million carats by the 2019 financial year. [Petra CEO Johan] Dippenaar says Cullinan’s old mining areas have become 'contaminated' with waste rock, which has resulted in the dilution of the ore grade and, therefore, lowered the mine’s earnings for each ton of ore treated. However, he points out that, through the implementation of the C-Cut project, pure kimberlite ore will in future be delivered to the mine for processing, thereby significantly enhancing the quality of diamonds produced." The C-Cut expansion project will also establish a new block cave on the western side of the ore body, which is estimated to contain 133-million carats. It will also involve a large tailings retreatment operation. Petra’s current mine plan envisions a life-of-mine (LoM) to 2030, but the major residual resources at the mine indicate that the actual LoM could be more than 50 years.

Dippenaar told Engineering News that the modern processing plant being built at Cullinan has a throughput capacity of six-million tons a year, adding that the project has an internal rate of return of 25% with a payback of about three years. Dippenaar emphasises that the plant is an important part of Petra’s plans to create a long-term sustainable future for the Cullinan mine and will replace the existing plant, which was commissioned in 1947 and has undergone various refurbishments. “The technologies planned for the new plant include autogenous milling, high- pressure grinding rolls and the enhanced use of X-ray fluorescence to replace conventional dense-media separation plants to treat coarser material larger than 12 mm in diameter. These solutions will be implemented with the commissioning of the plant.”