Bain: In 2016, Chinese Luxury Consumption Fails to Grow for First Time in History 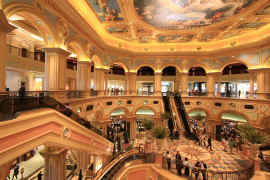 Jing Daily writes that according to Bain & Company’s annual industry "Bain Luxury Study" report, 2016 marks the first time in history that Chinese consumers contributed less to global luxury sales than they did the year before, despite China’s luxury market growth re-emerging into positive territory after two years of recession. In 2015, writes Yiling Pan for Jing Daily, Bain & Company reported a 2% decline for China’s luxury market, as consumers mostly spent their money on luxury products overseas. The new report says that the domestic market is growing again after Bain reported in May that it would be up 2%. Chinese consumers increasing their spend in the country’s domestic luxury market, however, does not make up for decreased spending overseas. China’s overall contribution to the global market was reduced to 30% in 2016, a drop of one percentage point from the year before, the report shows.

Yiling Pan writes: "This development bucks the trend of shopping for luxury goods overseas among Chinese consumers, but it does not come fully as a surprise after years of effort spent by the Chinese government to drive more consumption at home. For the past few years, Chinese consumers have shown great enthusiasm in making their luxury purchases abroad, causing cross-border shopping (haitao) and the daigou market to boom.  However, the daigou market has shown signs of contraction since earlier this year after the Ministry of Finance, General Administration of Customs, and State Administration of Taxation jointly issued a new regulation to impose higher tariffs and stricter customs control on cross-border shipping in April. Meanwhile, the depreciation of the Chinese yuan also hurts people’s interests in purchasing luxury goods abroad. The value of the currency has dropped more than four percent since the beginning of 2016." If brands still wish to succeed in China, they are going to have to adjust their approach.

According to Claudia D’Arpizio, a Bain partner in Milan and lead author of the study, “The luxury market has reached a maturation point. Brands can no longer rely on low-hanging fruit. Instead, they really need to implement differentiating strategies to succeed going forward. We are already starting to see clear polarization when it comes to performance with winners and losers emerging across product categories and segments." The overall conclusion could be a temporary situation, however. Over the longer term, Bain & Company still thinks China will be a leading contributor to global personal luxury goods consumption, due in large part to its growing middle class. Bain’s advice to luxury brands for getting a piece of pie in this transformative market is to “adapt their business and take an omnichannel, customer-centric approach.”