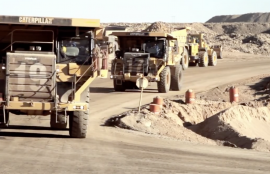 Trans Hex, a JSE-listed alluvial diamond mining company with well-established land operations in South Africa and interests in Angola, experienced a complete turnaround of fortunes in the first six months of 2016 ended September 30, as net profits moved to $2.43 million (R32,5 million) as compared to a $2.43 million net loss for the first half of 2015. The company noted that demand for diamonds slowed at the start of the second half of the calendar year, but the market had recovered somewhat in September, boosting polished diamond sales: sales revenue from the wholly owned South African operations increased by 2.5% compared to the corresponding period to $20.6 million (R275.3 million) compared to $20.1 million (R268,7 million) in 2015. The main drivers of the turnaround in profits were a 10.5% improvement in average diamond prices and a 15.4% weakening of the rand against the dollar. This was offset in part by a 19.6% decline in carats sold, with local production decreasing 20.6% to 18,997 carats.

Trans Hex's lower production and decline in overall diamond sales were some wer in line with a new operating model that was introduced at the Lower Orange River operations in February to extend the life-of-mine of these operations for as long as possible. Still, their South African production for the financial year to March 31 2017, is expected to be around 41,000 carats, compared with 2016 production of 48,435 ct. Trans Hex also has a 40% stake in West Coast Resources. This operation was formerly known as Namaqualand diamond mine which Trans Hex helped buy from De Beers two years ago after a protracted buy-out process. It produced 37,153 carats (from 4,821 carats) and is projected to increase output to some 80,000 carats in the 2017 financial year. The strongest performer the Angolan Somiluana mine, which increased production to 91,033 carats (from 67,981 carats) due to a 50% improvement in grade, partly offset by a 10.9% decrease in gravel treated. Trans Hex owns a 33% stake in the mine. Trans Hex expects Somiluana’s carat production for the 2017 financial year to surpass the 99,500 ct produced in 2016.

Trans Hex’s Lower Orange River operations are situated along the southern bank of the Orange River in the Northern Cape and start approximately 60 km upstream from Alexander Bay. The operations consist of Baken and Bloeddrif Mines, both 100% owned by Trans Hex. Trans Hex has been contracted by West Coast Resources (Pty) Ltd to manage the day-to-day operations of its Namaqualand project. Trans Hex holds a 40% stake in West Coast Resources. Trans Hex operates the Somiluana Mine in Angola, located approximately 1 000 km northeast of Luanda in the diamond-rich but underdeveloped province of Lunda Norte. Trans Hex holds a 33% stake in the Mine, while Endiama, the state diamond company, holds a 39% stake. Trans Hex Diamond Cutting Works (THDCW), located in Johannesburg, is a small-scale, black-empowered cutting and polishing factory that beneficiates a percentage of the Group’s South African-mined diamonds.