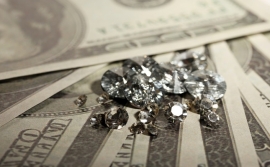 According to polishedprices, the polished diamond price index slumped to its lowest level since March 2010, while Rapaport writes that its polished price index dropped 4.3% in the first ten months of the year. Both index leaders view the Chinese, Jewish and Indian holidays as exerting downward pressure on the markets in October, with this week's traditional slowing coming ahead of the Diwali holidays. Rapaport also says that, "Trading slowed as larger U.S. holiday orders were already filled and dealers shifted to accommodate specific requirements from their retail customers," adding that while, "Market sentiment improved after the September Hong Kong show, polished trading remained sluggish and inventory levels relatively high." In short, with the Diwali, Christmas and Chinese New Year holidays already on retailers minds', the focus has shifted away from trading.

"However," Rapaport adds, "holiday jewelry sales are unlikely to stimulate a sustainable rise in diamond trading and polished prices are expected to remain under pressure for the rest of 2016 and into 2017. That should cause rough prices to soften in the long term. With sufficient stock in the midstream, the diamond trade continues to re-align its inventory with lower levels of demand while there is still an overhang of supply from previous years." To this point, however, unless we see notable decline in rough diamond demand in October - which is likely, but we will know soon enough - it is remarkable the levels at which mining companies are finding buyers for their goods. ALROSA's revenue from rough diamond sales in Q3 2016 amounted to at least $976 million, representing a 77% jump from the $550 million sold in Q3 2015, while De Beers' Cycle 8 sight in October, at $485 million, and rough diamond sales for Q3 were up 77%.

Meanwhile, Antwerp's rough exports in September increased 61% in value year on year to $1.42 billion on a 26% increase in volume traded, while rough imports also rose a full 39% in value to $1.2 billion on a 45.6% increase in volume over September 2015. Meanwhile, India's rough diamond imports during the month of September were up 71.25% in value terms, climbing from $1.05 billion in 2015 to $1.80 billion this year. On the manufacturing side, Rapaport says that profits remain tight due to sluggish polished demand, while rough trading was relatively strong in the third quarter.