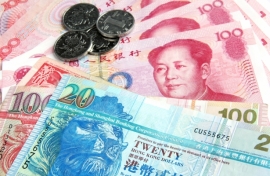 The weakening of the yuan against the Hong Kong dollar is making life even more difficult for the city’s retailers, with brands forced to raise prices of local goods for mainland visitors to offset the yuan's fall amid an already weak tourism industry, writes the South China Morning Post. Name brand jewelers and luxury goods retailers, much of whose sales are driven by mainland tourists, have raised yuan-denominated prices by 2 to 3% to offset a two-week slide in the currency, which saw its value shrink 1.5% against the US dollar, to which Hong Kong’s currency is pegged. Kathy Chan, CFO at Luk Fook Jewellery, the city’s second largest jeweller, said depreciation of the yuan since last year was one factor to blame for sluggish sales in the city. She predicted business would remain under pressure with the Chinese currency expected to slide further amid US interest rate hikes. “It weakens the purchasing power of [mainland] customers in Hong Kong,” she said. Visitors from across the border contribute roughly half of the jeweler’s revenue.

Hong Kong-based Chow Tai Fook reported revenue slumped in the second fiscal quarter from a high base last year, with retail sales falling 33% in Hong Kong and Macau in the three months ended September 30. Same store sales slid 30% in Hong Kong and Macau and dropped 22% in Mainland China. Meanwhile, Luk Fook Jewellery said that Hong Kong and Macau sales between July and September slumped 39% compared with the same period last year, saying “overall sluggish retail sentiment” caused the fall, while also claiming sales in that period were being compared to a “high comparable base” seen last year. Jewelers that accept yuan as cash payment have gradually adjusted the exchange rate from 0.86 to 0.88 per Hong Kong dollar in the last two weeks. Some, such as Lau Hak-bun, director for greater China at Chow Sang Sang jewelers, feel the impact has been limited and will be offset by the Q4 wedding season.

SCMP writes that Hong Kong’s tourism industry is experiencing its worst slump in years. Still, Forrest Chan, executive director of the consumer research division of CCB International, an investment arm of China Construction Bank, said yuan depreciation had been moderate so far and would not significantly affect the local retail market. But he warned that the competitive advantages of Hong Kong as a travel destination would be dampened with any long-term depreciation in the Chinese currency.