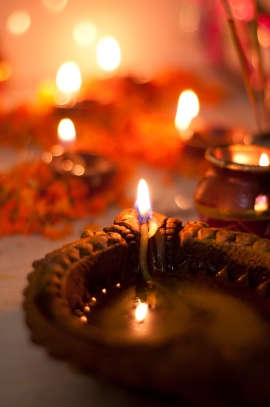 The 20-day Diwali holiday vacation has already arrived for most of the small and medium diamond manufacturing units in in Katargam and Varachha, while units in Surat are just starting to shut down. According to The Times of India, "Industry sources said the polished diamond inventory is full and that most of the units had slashed the production by almost 30% in the last few months. The small diamond units making diamonds below 0.02 carats are the most affected as the polished diamond prices have decreased in the international market by almost 10-15%." TOI estimates that 400,000 polishers are employed at some four thousand large, small and medium-size outfits in Surat alone.

TOI quotes the former president of the Surat Diamond Association (SDA), CP Vanani as saying, "In the next two days, almost the entire industry will shut for the Diwali vacation. Many small units have started closing down from Monday following less movement in the market and increased polished diamond inventory."
Vanani added, "The demand in goods above 30% is average from the overseas market in US, China, Hong Kong and UAE, whereas the demand in small diamonds is yet to pick up. The upcoming Christmas season is going to be average for the small and medium players in the industry." Rajesh Mendpara, a polished diamond trader in Mahidhapura said, "The trading activity was quite ahead of the Diwali season. The domestic demand was below average this season. The buyers are asking for huge discounts in prices, which we are unable to offer."